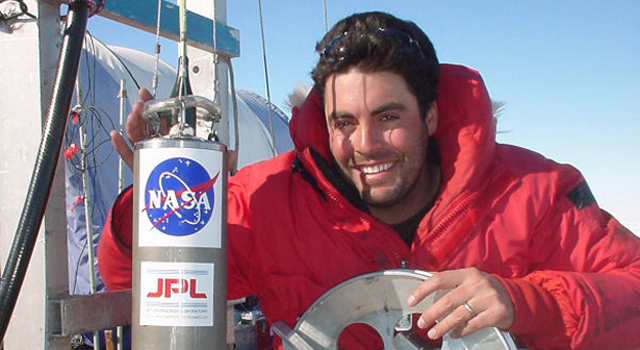 Died instantly when his single-engine plane nosedived shortly after takeoff Friday from Van Nuys Airport He worked on two Mars missions and spent years researching how robots work in harsh environments like volcanoes and underwater As part of the NASA team exploring Mars with the Curiosity rover, Behar was responsible for a device that detected hydrogen on the planet’s surface as the rover moved.
47-year old NASA Scientist Alberto Behar helped to prove that there had once been water on Mars according to the sad Daily Mail story published to announce his recent death in a plane crash that happened on Friday in LA, California. While plane crashes do happen and scientists do die, Behar’s name has now been added to a very long list of scientists and astronomers who have met their untimely ends prematurely, leading us to ask, did Behar know something that ‘they’ don’t want the rest of society to find out?

Martin John Rogers was found « near » his wrecked car down in an embankment in western Maryland on Thursday, September 4, 2014, after disappearing on August 21, 2014 when he left home for work at the world-renowned research center near Washington, D.C. No word yet on the cause of death, an autopsy will be performed to determine the manner of death, according to LA Times’ The Baxter Bulletin.

Here is where the mystery comes in. According to the report the search for Rogers didn’t start until a « few days after he failed to show up for work, » but on the day he disappeared he is seen on a surveillance and used a credit card at a Motel 8 a few hours after he left home. Two days later there is a report of a sighting of Rogers on a « local trail, » which authorities have deemed « likely credible.While the search for Rogers is over, the search for answers regarding his disappearance and death continues.

Glenn Thomas, AIDS and Ebola expert and spokesperson for the World Health Organization.

Ebola expert Glenn Thomas was among the 298 people who were killed when Malaysia Airlines flight MH17 was shot down and crashed in Ukraine. It is understood he was one of more than 100 researchers who were aboard the flight on their way to an international Aids conference in Australia. Among the other delegates aboard the plane was Joep Lange, a leading AIDS researcher and former president of the International AIDS Society (IAS)

A renowned American engineer was found dead in his hotel room in Salford after his heart suddenly stopped working. Mark Ferri, 59, from Tennessee, had completed two degrees in engineering as well as an MBA before becoming a nuclear engineer.At an inquest into Mr Ferri’s death at Bolton Crown Court, it was heard that the dad-of-one was visiting Manchester on business on September 18 – the day of his death.

It was said Mr Ferri had been under stress from his job. His wife, Michaela, told the inquest: “He said a number of times, this job is killing me.” Mr Ferri was originally due to return to the US a week earlier to see his family but was asked to remain in the UK for an extra week.

On September 5, Mrs Ferri spoke to her husband and said that ‘he didn’t sound right’. She said: “He said it was just his work and they were giving him additional assignments and he was feeling overwhelmed and he didn’t think he would be able to complete them”.

Officers had found nothing in Ambruster’s life or history that appeared suspicious. Philly.com reported; Carol W. Ambruster, 69 was found by her roommate in the kitchen of her apartment in the 5500 block of Wayne Avenue , Germantown with a knife in her neck about 9 p.m., police said. She also had been stabbed in the chest.Ambruster, a tenured professor in the department of astronomy and astrophysics at Villanova, retired in 2011. Ambruster attended Northeastern University, where she majored in physics, and received her doctorate in astronomy from the University of Pennsylvania in 1984. Her research interests included stars and the history of astronomy.

Mystery: Doctors are still at a loss to explain Dr Anne Szarewski’s death in her Hampstead home in August. Doctors are still at a loss to explain what exactly caused the brilliant researcher’s death. She was found with high levels of an anti-malarial drug in her bloodstream, but doctors said this was not thought to have caused her death. The scientist who pioneered the cervical cancer vaccine was found dead by her husband at their £2million home after he warned she was ‘heading for a crisis’ by working too hard. Dr Anne Szarewski, 53, a university lecturer whose discovery has saved thousands of lives, was begged to slow down by her husband, who was becoming increasingly concerned about the pressure she was putting on herself. In August he found her dead in their four-bedroom home in West Hampstead, north London, after he spent two hours drilling through a door she had locked from the inside. Dr Szarewski is credited with discovering the link between the human papillomavirus and cervical cancer, leading to a vaccine for HPV – the first-ever vaccine against any form of cancer – which is now routinely given to girls across the country.

Mystery: Dr. Todd felt increasingly uncomfortable with the work he was doing with the Chinese company Huawei, to the point Shane told his family that he was being asked to compromise US security and he feared for his life. Shane was working on a “one of a kind” machine, with a dual use in commercial and in military application, requiring expertise in the area of GaN (Gallium Nitride). Shane refused to do what he was being asked to do and turned in his sixty day notice at IME. Shane found a good job with a company in Virginia, and bought a ticket to fly back to the US on July 1, 2012. Shane was killed late June 22nd, or 23rd, right after his last day of work.Shane’s death was so unusual that CBS 48 Hours did a show on it.

48 Hours: Did a son die protecting American secrets? A family’s quest for the truth

Dr. Richard Holmes , age 48. Weapons expert. Dr Holmes is believed to have worked on the production of chemical protection suits for troops. In 1991 he was the joint author of a scientific paper about an RAF chemical and biological protection system. Suicide riddle of weapons expert who worked with David Kelly: Scientist tells wife he is going for a walk, then takes his life in a field… just like his friend

A weapons expert who worked with Dr David Kelly at the Government’s secret chemical warfare laboratory has been found dead in an apparent suicide.

In circumstances strongly reminiscent of Dr Kelly’s own mysterious death nine years ago, the body of Dr Richard Holmes was discovered in a field four miles from the Porton Down defence establishment in Wiltshire. It is not yet known how he died.

– Firefighters find charred body of murdered pediatrician who was hog-tied, strangled and set on fire in her basementDr. Kentunuti worked at Children’s Hospital of Philadelphia and dedicated her whole life to being a doctor and helping kids with cancer. According to the Philadelphia Inquirer, she earned a doctorate in medicine from Stanford University and had initially considered working as a surgeon internationally.

She worked on an AIDS research fellowship in Botswana through the National Institutes of Health. She also completed internships at Johns Hopkins Hospital and New York University.
Read more: http://www.dailymail.co.uk/news/article-2266433/Melissa-Ketunuti-murder-Philadelphia-pediatrician-hog-tied-strangled-set-basement.html#ixzz2Ijyy1Y00

, 60, died May 27 in an off-road accident in Arizona. Dr. Crowe came to UH Hilo 25 years ago and helped launch the University’s undergraduate astronomy program. is numerous publications and co-authored works added significantly to the body of astronomical literature. He regularly trained UHH student observers with the UH 24-inch telescope on Mauna Kea, and conducted many research programs on that telescope. In 2005, he won the AstroDay Excellence in Teaching Award for his efforts. In 1991, Dr. Crowe was selected as a Fujio Matsuda Research Fellow for his scholarly work on pulsating variable stars. Crowe was also active in the community. He was a longtime member of the Rotary Club of Hilo Bay.

Died Jan. 17, when she was shot outside her home, DDetectives investigating the murder of an Iranian molecular scientist gunned down in her car as she drove home believe she was followed or that someone was waiting for her. Bagherzadeh was struck by a single bullet that entered the passenger door window as she talked on her cell phone with her ex-boyfriend. Bagherzadeh was a molecular genetic technology student at M.D. Anderson Cancer Center in Houston and also active in promoting Iranian women’s rights.

58, as a result of being attacked during a home invasion. Professor James Steven Miller came to Goshen College to teach in 1980, the same year he completed his doctorate degree in medical biochemistry at Ohio State University. He received his undergraduate degree in chemistry in 1975 from Bluffton (Ohio) University. The Goshen College Board of Directors granted Professor Miller tenure in June 1985. He primarily taught upper-level courses taken by students in nursing, pre-medical and other health-related tracks.

35, died July 4 in a boating accident on the Potomac River. Zack was a co-founder and a member of the Board of Directors for Omnis, Inc., a McLean, VA-based strategic consulting firm for the intelligence, defense and national security communities. He spearheaded major research initiatives and, in addition to helping steer the company, was directly involved in numerous projects, including analytic training and technology consulting. Prior to founding Omnis, Zack was an engineer and analyst for the U.S. Government and private industry. As a science and technology analyst, he assessed missile and space systems, managed technical contracts, and investigated Iraq’s Weapons of Mass Destruction (WMD) program as a member of the Iraq Survey Group, serving in Baghdad on two separate occasions. As an engineer, he worked on aerospace projects for the National Aeronautics and Space Administration (NASA), the Defense Advanced Research Projects Agency (DARPA), and private industry. Most notably, Zack designed critical guidance systems that ensured a successful landing for the Mars Exploration Rovers, Spirit and Opportunity; his name is inscribed on one of the rovers, and remains on Mars today.

55, died July 18 of an apparent heart attack. He was a professor of Molecular Biosciences in the Weinberg College of Arts and Sciences at Northwestern University. Widom focused on how DNA is packaged into chromosomes — and the location of nucleosomes specifically. Colleagues said the work has had profound implications for how genes are able to be read in the cell and how mutations outside of the regions that encode proteins can lead to errors and disease.